Hmmm, something looks a bit different with Sunshine Kitchen, you might be saying to yourself. Yes – I finally bought a domain name for this blog! I initially wanted to see if I was going to stick with this whole blogging thing, and then I just never bothered to get around to it. But here we are! Yay! So this week I decided to do another Persian/Iranian dish, which is called a kuku. It’s basically their version of a frittata. I looked at a number of recipes, and ended up making a stove-cooked mishmash of this recipe and this one.

Heat some olive oil in a frying pan. Saute the onions until soft, then add the eggplant pieces until they are soft too. While the eggplant and onion are cooking, beat the eggs in a bowl. Add the garlic, turmeric, ginger, parsley and a dash of salt. When the onions and eggplant are done, pour the egg mixture over them. Cover the frying pan and cook at medium heat until the edges are done. Flip and cook the other side until done, which will only be a few minutes. If you can actually flip in in one fell swoop, color me impressed. I, however, cut it in in half and flipped each one. Serve and eat warm. 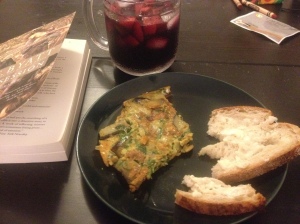 So good. The first bite was like, hmmm, but after a couple more bites it was mmmmmm! Every time I try a new Persian recipe my reaction is always why don’t I cook Persian dishes more often? This will be made again. And there are a billion variations, and I like the spice/herb combos in Persian food a lot so more versions will be made and posted as well. Song of the week: I am the Walrus, by the Beatles. Total honestly, when I saw the name of the zucchini version was kuku kadoo, my first thought was koo koo kachoo from this song’s refrain. So, it clearly needed to be featured this week. It’s also a great song and trippy in the best possible way.