It’s all Greek to me

Mediterranean food is amazing. I think its due to the climate – which, incidentally, is the same as the SF Bay Area climate – which allows for a full development of produce and ingredients. In one of my many “what can I scrape together from what happens to be in my fridge” moments, I decided to embrace the region for a full meal. Zucchini pancakes, tomato salad, Portugese wine, and baklava. Really only the zucchini pancakes were in my fridge (un-assembled of course). Baklava took some special shopping. I’m weird and dislike the vast majority of nuts. But I love pine nuts, so I decided to make pine nut baklava for dessert. Shopping tip: Trader Joe’s has good prices for nuts, particularly pine nuts, which run on the expensive side. The result was amazing Mediterranean food

Grate the zucchini, either in a food processor or, if you are low-tech like me, a standing cheese grater. Stick in a bowl, and mix with the all the other ingredients except the egg. Beat the egg separately and add it to the mixture last. Heat olive oil  in a pan. Once the oil is hot, add large spoonfuls of the mixture to the pan, and fry on both sides. Transfer to a paper-towel-lined plate.  Warning – these pancakes are very soft and kinda delicate – it will go much easier if you try to make them small. I didn’t and it caused me some slight issues.

zucchini pancakes, tomato salad and wine, on top of my 1/2 completed jigsaw puzzle

Pine Nut Baklava: I actually got this recipe from my friend’s mom, who is Greek and makes baklava with some regularity. I adjusted the proportions down to make it more appropriate for 1-2 people.

Pre-thaw the phyllo dough. Combine the chopped nuts with sugar, cinnamon, and allspice. In a separate bowl, melt the butter. To assemble, brush every other sheet with butter and place it in a pan. I used an 8X8 pan, which meant I had to cut the phyllo down to size. In theory, you need a pastry brush, but I was too lazy to buy one – you can spread butter with the back of a spoon fairly well. Once you have 5-6 sheets in the pan, scatter 1/3 of the nut mixture over the dough. Add 3 or so more sheets, and scatter another third, and then do that again. Make sure the top layer of phyllo is a little thicker – more like 6 layers. Cut into squares and bake at 350 for 30 minutes or so, till its all golden brown.  While it is baking, make the syrup.

Combine all the ingredients in a small sauce pan. Simmer for 7ish minutes, or until it thickens, a little. It won’t thicken a lot, so no worries on that front. Let it cool. Once the baklava is out of the oven, pour the syrup over it, and let it all sit for several hours before eating it. 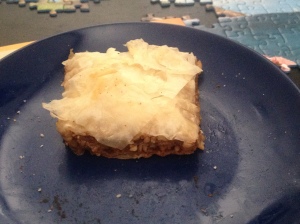 Both recipes were awesome – so much so that I ate them both up way too quickly. The zucchini pancakes didn’t need any garnish or topping, but I’m sure a little greek yogurt on it would work really well. The only problem with the pancakes is that they were very very soft – nearly too soft to flip successfully. The baklava was perfect – not overpoweringly sweet and dangerously addictive. The only minor thing is that it doesn’t stay as flaky after a few days, so you might want to eat it quickly or share. Naturally, I paired this with a white wine, because its summer. But I think it meshes a bit better. If you desperately want a  red, I’d suggest a Beaujolais, which won’t overpower the zucchini pancakes.