Finally, after a month and a half of slow, spastic progress, I finished reading the Aeneid! I am very proud of myself. It’s a worthwhile read, but its important to keep in mind that it was written as a piece of pro-Augustus propaganda – extolling the virtues of the Roman empire while creating a glorious national myth (much like Washington Irving and Longfellow in the US). Regardless, I felt the need to celebrate my own glorious triumph over the poem and what better way to do that than with making Ancient Roman food? I found this amazing blog dedicated to this very topic: Pass the Garum – and after some searching, decided to so my own version of this stale bread salad. The topping is not actually pesto per se, but calling it that was the best equivalent I could come up with so there we go.

Take the garlic, cheese, and mint and grind them together with a mortar and pestle. However, if you are like me and don’t have a mortar and pestle, stick it in a heavy bowl, and use the end of a rolling pin to pound, mash, and mix – it works particularly well if you have a French rolling pin (which are 1000 times better than normal ones so you should get one regardless). Just be careful not to break the bowl and you’ll be totally fine. Once you have a paste, add the honey and olive oil and mix it all together with a spoon. Adjust ingredients according to your preferences.

So, you have two options now. Spread the pesto stuff on fresh bread or, you can take stale bread and pour posca over it, and then put the pesto on that. What’s posca you ask? Its vinegar water that was a refreshing drink for the Roman army. Take 1 glass of water, and mix it with 1-2 tablespoons of red wine vinegar and a dab of honey (melted).If you have leftover posca, you can simply drink it. 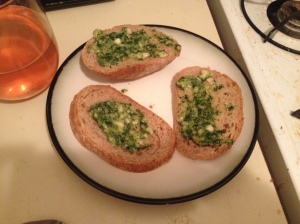 Bread with the pesto and a glass of posca

The result was awesome. The pesto was obviously incredibly delicious, especially on fresh bread, although the mint flavor gets rather overpowered by everything else – or I possibly use too much garlic … The posca was the true shock – it was good! Let’s be honest, vinegar water sounds nasty, and I already like the taste of vinegar. But its oddly good – particularly if its cold. So be brave and try it! And if you hate it than feel free to blame me for having weird taste buds. Obviously you can pair the pesto with posca, but you should also pair it with a European wine – white or red really doesn’t matter. Just not beer – only barbarians drank beer at this point, according to my brief search in internet-land. Song of the week – Fell in Love with a Girl, by the White Stripes. It’s short, but it is solid rock.