Pattypan squash is such a funny vegetable. It’s like a scalloped flying saucer. I’ve wanted to learn how to cook them for a while, but had no idea how to approach it – and honestly, chopping it into pieces seemed like a waste of their cool shape. But then I found this recipe for Eggs Baked in Pattypan Squash and it seemed like a good thing to try.

Trim the ends of the pattypan squash. Then take a spoon and hollow out the middle of the squash, leaving at least 1/4 of an inch of flesh/rind all around. Brush with olive oil and bake at 375 for 15 minutes. While the squash are baking, saute the onion in some olive oil. After a few minutes add the garlic and then the thyme. Once the onion is soft, remove from heat. Into the little pattypan squash holes, scoop in some of the onion mixture. Then crack an egg and slip it into the hole as well. Carefully return it to the oven and bake until the eggs are set/as done as you want them – about 15 minutes. 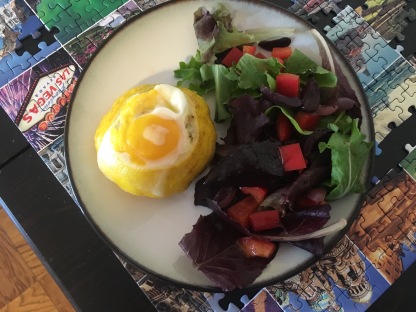 I really liked this recipe. The only problem I had with it was the the pattypan squash were too small for a whole egg to go in there! There was some spillage into the baking pan. This was touted (and would make) a great brunch dish, but I had it with salad and wine as a light dinner and that worked well. So this I think was a great, simple introductory recipe to such a funny-looking veggie. Song of the Week: Sit Down John, from 1776. Long before there was Hamilton, there was another surprise Broadway hit about the Revolutionary War – 1776 which focused on the Continental Congress declaring American independence. I have been obsessed with this musical since I was 5 and listen to the soundtrack every 4th of July.