This recipe came about due to an alcohol-buying mistake. I had an open bottle of red wine that had a weirdly smoky aftertaste, so I didn’t want to keep drinking it. But it was perfectly good wine, so I figured I should at least cook with it. Annoyingly for me, most recipes calling for a red wine sauce involve meat. But then I found this recipe for poached eggs in wine sauce and decided to give it a try. Albeit with a less complicated sauce.

Melt some butter in a small saucepan and saute the leek and garlic for a few minutes.  Melt a bit more butter and mix it with the flour into a paste. Add the thyme, stock, and red wine. Mix so the butter-flour paste is thoroughly dissolved in the liquid. Simmer the mixture until the volume has reduced by about half. I boiled mine a little too long I think. It started getting vinegary-tasting so I added a bit more red wine and that fixed it. Set aside. Poach however many eggs you intend to cook. To poach an egg you (in theory) crack open the shell and gently slide the egg into the water, where you boil it for a few minutes until the desired done-ness. Well, keeping the egg a coherent blob is surprisingly difficult, but you can use a spoon to try to gather the white which will spread out in the water. Once the eggs are done, stick an egg on a piece of toast and spoon the sauce on and around it. Serve warm. 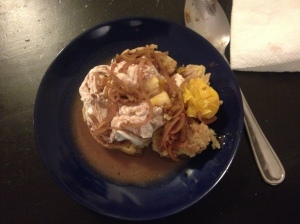 Ok, so this wasn’t quite as pretty as the picture I saw. But it has character.

This turned out pretty well actually. It looks a bit messy, but its actually tasty, and I like the sauce with all the leeks and garlic in it. Those are always good things. I didn’t actually toast my bread first, and that was a mistake – toasted bread will be better. So, if you have red wine you want to cook with, or just want a non-meat accompaniment to it, I would suggest trying this recipe out.  Obviously you serve this with more red wine, and a nice green salad to make a decent meal. Song of the Week: Moscow Nights by the Red Army Choir. Last week was Russian (Orthodox) Christmas (for which my family eats Chinese food – long story) so a Russian song felt appropriate. And while Tchaikovsky is my favorite Russian composer and one of my top three favorite all time composers, I decided to share something different. I also really love this song, and I think its a beautiful rendition.