So I couple weeks ago, as I had previously mentions, I had intended to bring dessert in for me and a coworker, but did not follow through. Since then, I felt mildly guilty enough that I promised myself I’d bring some in next time we worked together. Which I actually followed through on – I brought cookies! Since it’s September, and in my mind fall has arbitrarily begun – doesn’t matter that it’s still incredibly hot out as I get to drink Oktoberfest beers – I wanted to make something in the gingerbread family. After numerous consultations with my cookbooks, I decided on ginger-molasses cookies.

Cream together the butter, sugar, molasses and egg until fluffy. Add the soda and spices and mix them in. The add about 1 cup of flour. Once that’s incorporated, keep adding flour, a little at a time, until you have a soft, non-sticky dough. Plop large-ish spoonfuls on a baking sheet, and bake at 350 for around 15 minutes. 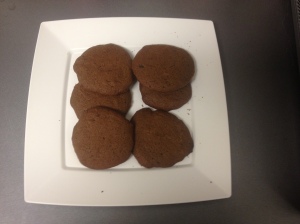 These were awesome. They taste extremely similar to my favorite gingerbread cake, which was what I was aiming for, and very different from the standard gingerbread cookies one makes at Christmas (and better in my opinion). I do have to warn you, they are a little intense, so if you aren’t a fan on gingerbread, don’t bother trying these. And two of my coworkers liked them too! Song of the week: Stereo Hearts by Gym Class Heroes. A fun, enjoyable song – not earth-shatteringly good, but fun too listen to when you’re in the mood.