This week, I was at a loss for inspiration. Sad but it happens. However, this is why we have cookbooks! and food blogs! Rather than flipping through Greens again, I went through the spring and summer sections of my French Market cookbook, and in the summer section, I found something that I actually had nearly all the ingredients for. Not quite all, but close enough for me to attempt my own version: Corsican Bell Pepper Stew.

Prep all the ingredients first. Heat the olive oil in a saucepan, and saute the onions and garlic for a few minutes, like five. Then add the diced (not chopped, diced) bell peppers and the rosemary. Let the whole thing stew on medium-low heat until the bell peppers have softened, about 25 minutes or so. Then add the tomatoes, wine, and salt to taste. Stew until the tomatoes have broken down, about another 15 minutes. Let the stew cool (seriously you can let it just sit for hours, it actually improves it), then splash with a little wine vinegar and adjust the salt to taste if necessary. You can serve it as a side, but I had it spread on some bread. 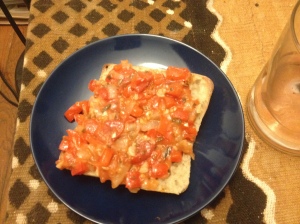 Tasty! So tasty. It reminded me of caponata, albeit without the eggplant or pine nuts. Which, geographically makes a certain amount of sense. I’m pretty sure you could do a lot with this stuff besides sticking it on bread – which admittedly was pretty awesome. I’ll have to experiment and see how that goes. Serve with a glass of whatever wine you cooked with – and drank while cooking if you are anything like me. I went with a French rose – its late spring and hot out so I’m off red wine until fall, and French wine seemed appropriate to go with French food. Song of the week: It Wasn’t Me by Shaggy. This came on the radio when I was driving a week or so ago and I was singing along and still know almost all the words. It’s so messed up and yet.