Ahhh, Thanksgiving. That lovely harvest festival wrapped up in national myth-making and stressed out travelers. Or, if you are me, working. Yes, the U.S. government continues to function on Thanksgiving, so I had to as well. The result of which is that I made my own harvest festival meal for myself over the weekend. This turned into a massive, delicious and mostly-healthy five-course dinner. Since that is way too much for a single blog post, here are the first two course, both totally new dishes: Baked brie (which I found here) and sweet potato souffle (which I adapted from here)

Appetizer:
Baked brie
Some firm brie, in theory a full round, but any amount will do
Apricot jam
6 sheet of filo dough, cut to fully cover the brie like wrapping paper
1-2 tablespoons melted butter

Spread each sheet of filo dough with the melted butter, using either a pastry brush or a spoon, and layer them not directly on top of each other, but a bit off center, so its a bit larger of a space. Stick the brie in the middle. Cover the top of the brie with the apricot jam. Fold the filo dough over the top of the brie. Brush to top of the brie package with more butter so it all holds together. Bake at 350 for 15-20 minutes, or until the brie melts and starts oozing out of the pastry. Serve with some baguette slices and wine, although I had this with a farmhouse ale – Tank 7 by Boulevard brewery (one of my favs). 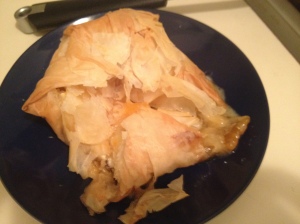 Baked brie is frigging AMAZING. Serious incredible stuff. Its good warm, cold, on bread, by itself, and is so freaking addictive you either need to make a small amount or have people around to eat it because you will not be able to control yourself and eat only a little. It’s that good 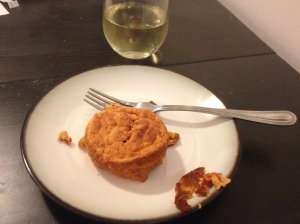 It wasn’t supposed to be quite that small…

So… this was my first time attempting any souffle and it didn’t exactly go as planned. They were tasty but they shrunk!?! I’m really not sure how that one happened. They tasted light too so the only thing I could think of is maybe I cooked them too long and they rose and fell in the oven? I have no idea where I went wrong on that one. Still tasty though, so I have no qualms recommending the concept at least.

Returning to cold weather also means a return to cold weather food. Sadly I was severely lacking in inspiration this week, and I wanted to be sure to make something that would result in leftovers for work. So, I decided to check my Harry Potter cookbook, figuring the British would at least have a decent set of heavy, cold weather foods. What I found was an odd-looking dish called Savoury Derby Pudding. It’s basically a cross between sage and onion stuffing and Yorkshire pudding. I was intrigued.

Take stale bread and cut it into really little pieces – as close to the size of the oats as you can. Bigger than bread crumbs, but not by much. I used wheat bread, but you can probably use whatever kind of bread you like. Pour that and the oats into a large bowl. Add the milk and stir. Let it sit for 10-15 minutes, stirring occasionally. Add the eggs, onion, sage and butter and mix it all together thoroughly. Pour it into an 8X8 pan and bake at 350 for 45 minutes, or until the top it browning, and it is dry and cooked all the way through. 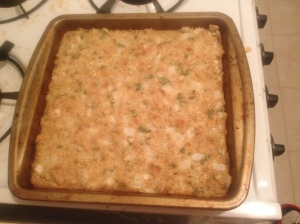 Result: MMMMMMMM. A little odd at first, because the oats added an interesting texture to the recipe and the egg-y aspect was interesting. But the lots of sage and onion was awesome. I did feel like it was missing something at the beginning, so I made some cranberry sauce and added that, and it was perfect! It’s a fun, different variation on essentially sage-and-onion stuffing, and it is extremely filling and great for a cold night. And makes excellent leftovers. Song of the week: Baby, It’s You by the Beatles. Even I have a romantic streak and who doesn’t love a song with sha-la-las?

This past weekend I took a short vacation to San Juan in Puerto Rico because its warm and there is cool stuff there. And mojitos – you gotta love mojitos. Unfortunately, I wasn’t able to take a cooking class while I was there so no new recipes this week. But I was able to sample a bunch of different dishes, although I might have lost a year of my life, I ate so much fried food. So without further ado, some Puerto Rican dishes and my thoughts. 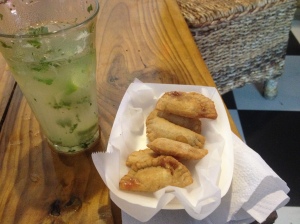 Ok, these were officially amazing. Its a weird combo of flavors, and the cheese was similar to cotija. But it was freaking delicious. I also had fried cheese dipped in guava sauce, but I think the pastry version was better, even if I did nearly burn my tongue when I first tried it. Served with a mojito of course. 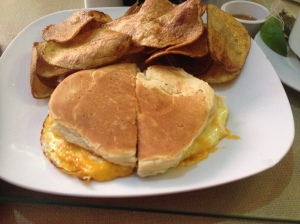 Two fried eggs, cheese, and some sort of pastry/bread thingy (like a Puerto Rican brioche) as a sandwich for breakfast? Yes please! This dish normally comes with ham, but I obviously opted out of it. It also came with fried plaintain chips, which were pretty great, though maybe not ideal for breakfast at 8 am. I had this with fresh-squeeze orange juice, since they didn’t have black tea. 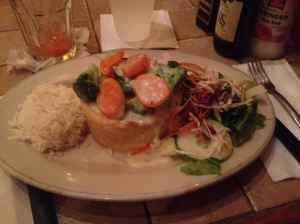 This is basically mashed yucca, shaped into a bowl, which was then filled with whatever, in my case vegetables. So, this dish is a perfect example of why people frown on vegetarian food – the veggies were poorly cooked. I don’t know how you can mess up carrots and broccoli, maybe they were frozen at some point, but they were ehhh and the sauce only covered it up a bit. I’m sure the restaurant does an excellent job with the meat version. The yucca mofongo itself was delicious though. I had this with a “tropical rum punch” which was way more rum than punch. 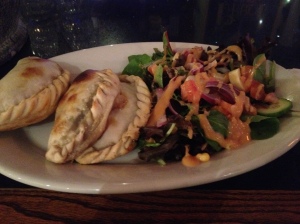 These I tried at an upscale Latin restaurant called the Parrot Club (which had super cool decor and the whole interior design was awesome) so the authenticity of this dish is a bit shaky. Black beans, cheese, and various small, chopped up vegetables inside baked pastry. It was seriously amazing. And the salad and the weird fruity dressing on it was great too. One of those meals where you think, yes, I paid a lot for that, but my god it was worth it. Just to mix it up a bit, I had this with caipirinhas – which is a Brazilian drink and is tasty.

I’m fairly anti-Taylor Swift, although I do like a couple of her songs (hey, they are seriously catchy) but this video set to one of her songs is one of the greatest things I’ve seen like, ever. Just watch it.

Day of the Dead: Roasted Squash with Green Mole

Unlike Cinqo de Mayo, Dia de los Muertos (Day of the Dead) is actually a legit Mexican holiday. Like pre-Conquista legit. Yet for some reason I’ve never really celebrated it. Maybe just because it comes right on Halloween (and Celts trump Mexicans in our Euro-centric culture). But this year I decided this would be an awesome choice for new-recipe day. After some internet research, and the sad acknowledgement that I am not skilled enough to make skull-shaped cakes, I decided to make Roasted squash with mole verde. However, I didn’t have pepitas, or more than one kind of chili and had already gone to the store, so what I made is a fairly bastardized version of mole verde. Oh well. My ancestors are Russian, so I doubt they will care.

Chop the butternut squash and toss with the oil and spices until thoroughly coated. Bake at 400 degrees for 30 minutes or so, until the squash is tender (as in can be easily pierced with a fork). Once its done, remove from the pan, and let cool. While that is going on, make the mole verde. 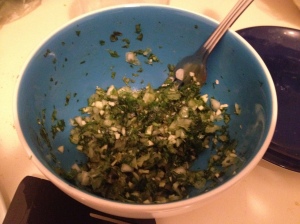 Mix the onion, garlic, pepper, and cilantro in a bowl. Remember to chop everything extremely fine. In theory, you should stick it all in a food processor, but chopping is fine, provided you make everything very small. Heat some olive oil in a frying pan, and add the onion-cilantro mixture. Saute for about 5 minutes, then add the vegetable broth. Cook for another 5 minutes or so, and then add the roasted squash. Cook until the squash are heated through, then serve. 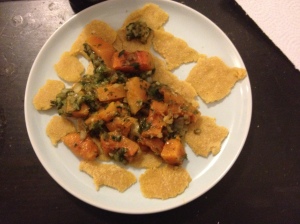 On a broken-up tortilla, but still delicious

This dish is awesome. Not particularly spicy, but seriously flavorful. I’ve been making not-spicy Mexican food as of late, which is tasty, but a little peculiar. You can serve this solo, with rice, or with tortillas. I served it with home-made (yes, that’s right) tortillas which almost worked. They were a little too crumbly and fell apart, but I am still pretty freaking proud of myself. I was out of white wine (and forgot to buy tequila) so I served it with a lighter-style beer. I didn’t realize until after I’d finished making it that this meal was totally vegan. My policy is that I don’t make “vegan food” but I do make food that happens to be vegan. Song of the week: Smooth by Santana featuring Rob Thomas. Cause Santana is a guitar god (just ask Rolling Stone) and I totally love this song. And listened to it a lot while cooking. Also, fun fact, Santana is a San Franciscan.