I have an absurd fondness for bunnies. Seeing a bunny is a good-luck omen for me (which is a very long story). So naturally, my amazing BFF last year sent me a picture of a loaf of bread, shaped like a bunny. It was so cute and I had to make it. But then I didn’t. This year, when Easter rolled around, I knew the time had come, the time for bunny bread.

Rather than trying a new type of bread, I went with my standard yeast dough. I use this dough for everything: rolls, pizza, pide, baked with brown sugar and cinnamon, etc. It is simple, quick (for a yeast bread) and amazingly versatile. For the record, this is a template; I don’t actually measure:
2/3-3/4 cup warm water
1 tablespoon brown sugar
1 package yeast
1-2 tablespoons olive oil
1 1/4 cups flour

Start by heating the water. I describe the proper temperature as “tea temperature,” hot, but not so hot you burn your tongue. Too hot kills yeast. Add the brown sugar and yeast, stir until its all dissolved, and let it sit until the yeast is bubbly, about 10 minutes. Once that happens, add the olive oil and 1 cup of flour or so. When the dough is sticky, but has largely come together, sprinkle on the last bit of flour, and knead that into the dough until it is elastic. Cover and let rise for about an hour.

The dough my be mine, but the construction technique is absolutely the hard work of a different blog, which you can (and should) check out here. Once the dough has risen, punch it down to get the air out. Rip off about half of the dough and set it aside: its the bunny’s body. Take about 1/3 of the remaining dough and roll it into a fat, long-ish sausage, and set it on the baking pan. Take another, smaller hunk of dough, and do the same thing, only make it more of a U shape. Then take the big blob of bunny body, and set it on top of the the 2 sausages. Tada, legs! Pull off a small piece of dough, and make a short little sausage, and stick half of it under the bunny’s butt for its tail. With the remaining dough, make it into a tear-drop shape, and place it where the bunny’s head goes. Slit the pointy end of the teardrop head in half, separate, and press down, to make the ears. Let it rise for another 30-40 minutes. 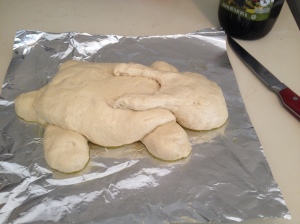 Assembled, but before it goes into the oven. My sister said it looked like it’d been run over by a car

Once it has finished rising, stick it in a pre-heated oven at 400 and let it bake until golden brown about 30 minutes or so. Remove from oven and place on a cooling rack immediately. Once it has cooled, enjoy!

Tada! Almost too cute to eat though

As you can see, the bunny bread is both adorable and delicious. The only problem with it was that I felt really awkward about cutting it, and had a difficult time figuring  out how to cut it. I was laughing at myself for having this problem, so I figured the best thing to do would be to chop off its head, and get it over with. As with any loaf of bread there are a million things to do with it, but I decided to add to my ridiculousness, and make Welsh Rarebit, using the bunny bread. Song of the week: Rose Tattoo by Dropkick Murphys. They are one of my favorite bands, and I absolutely love this song – its amazing.

As welsh Rarebit, with a side of sauted kale