My obsession with asparagus casseroles continues …. this time it was completely unplanned though. I was looking through my Greens cookbook for recipes for asparagus and they had a remarkably similar recipe for asparagus tart. By tart in this case they actually mean quiche. 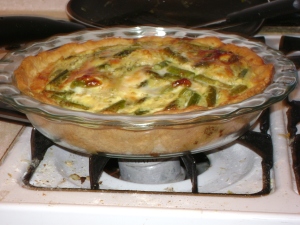 There were some slight differences, mainly they called for orange zest instead of lemon zest. Naturally I ignored this change and just used lemon zest. It called for gruyere  cheese; I used fontina. Other than that, the main change was the much higher milk/egg to veggies ratio because quiche is like that. They also had a different dough. Instead of pie crust, they had a specific “yeasted tart dough.” I must say I was not very impressed when all was said and done, too dry when it finished baking.  Pie crust dough is better. I think of the three recipes this was my favorite. I think would add more asparagus and cheese in the future though, and have slightly less egg/milk mixture. Still, this is getting down to changing and 95 to a 100. Serve with a glass of white wine and a small green salad.