Everyone craves soup when they are sick – it’s one of the ultimate comfort foods, narrowly behind ice cream. So when I was sick last week, I had a massive craving for miso soup. Two problems. One, I had none of the ingredients. Two, I’d never made miso soup before. I just order it when I’m at a Japanese restaurant. So I decided I would buy all the ingredients, make miso over the weekend, and freeze some for the next time I’m sick. Now yes, in theory I could buy instant miso packets but where is the fun in that? I kinda used the recipe in my vegetarian sushi book combined with vague memories of seeing other recipes (yes, there is such a thing as vegetarian sushi. No, sushi does not mean raw fish in Japanese. That’s sashimi. One of my best friends and I got in a fight about this in a grocery store once – he was wrong). This sounds like a disaster in the making, but it wasn’t, I promise.

To make the soup: Simmer some kombu (seaweed) in water for 10-15 minutes, and then remove. Add udon noodles and thinly sliced carrot. While that’s cooking, dissolve 1-2 tablespoons of miso paste – I used white miso – in some hot water. Add that, sliced scallions, tofu, and more seaweed to the broth. Simmer til done, then add a dash or two of soy sauce. Eat, or drink. 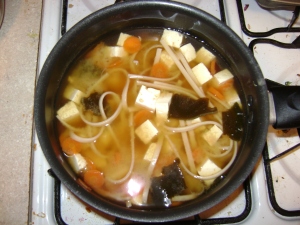 What I learned: 1. Kombu is not a good seaweed to just eat – too thick. Wakame is just way better. Spring for wakame. 2. Udon noodles are awesome. I’m really excited to do more with them, although maybe not in miso soup. 3. I really need to find an accessible Asian market so I can really get the right ingredients. Buying ingredients when I’m in Cali and bringing them back to the east coast is just not feasible (yes I’ve done that – its so hard to find good, authentic vegetarian curry paste that I had no choice). 4. All in all it turned out pretty well. I liked the udon, but its not supposed to be there so I think I will keep it traditional and omit the noodles next time. Was it as good as in my favorite restaurant? Of course not. Was is perfectly decent, and satisfy all my cravings? Yes. And that makes it a success in my book.