Tonight was my second date with parsnips, and I decided to be a little more bold this time around – parsnip gnocchi. Gnocchi has been one of my favorite foods since I was little, but I’ve never really made it myself. I’d either just cook the pre-made stuff, or my mom would make it. I sometimes helped, but it was 90% her because it was always great when she made it so why mess with a good thing? But now was as good a time as any to take the plunge and make gnocchi all by myself. 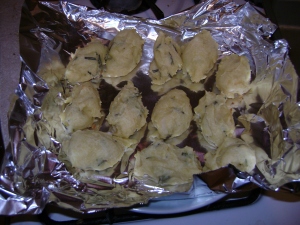 The Recipe: Now there are several ways of making gnocchi, and I chose the more French way – which is choux paste based (naturally that’s how my Mom does it too). In a saucepan – melt butter in water, and then add flour. Once all the flour is mixed in (it will be very stiff, dense and solid) you add egg and mix that in – which is more challenging than you might think. Exact proportions elude me, but I used about 1/4 cup water, 3 tablespoons of butter, 1/3 cup flour and 1 egg. Add mashed parsnip (prepared by chopping a parsnip into small pieces, steaming them and then mashing them with a fork) to the choux paste. I also added some fresh rosemary because it was in my fridge and at the “use it or toss it” phase of existence.

Shaping/Cooking the gnocchi: Get a spoonful of dough and shape it into an oval using another spoon, then drop it onto a baking sheet. To keep the dough from sticking to the spoons, dip them in water.  Rather than boiling, which is the norm, I actually baked the gnocchi – at 350 for maybe 20 min. Bake until crispy on the outside and starting to brown. Greasing the pan is probably a good idea … I didn’t and the gnocchi got stuck to the aluminum foil which was only a minor annoyance but still.

The result was lovely – you can taste the parsnipiness but its not too much, or I really do just like parsnips, and the rosemary is a nice compliment – its not an overpowering herb. Even though the gnocchi were slightly crispy, they were still all pillowy on the inside. I topped them with butter and parmesan cheese. All in all, my second date with parsnips went extremely well 🙂